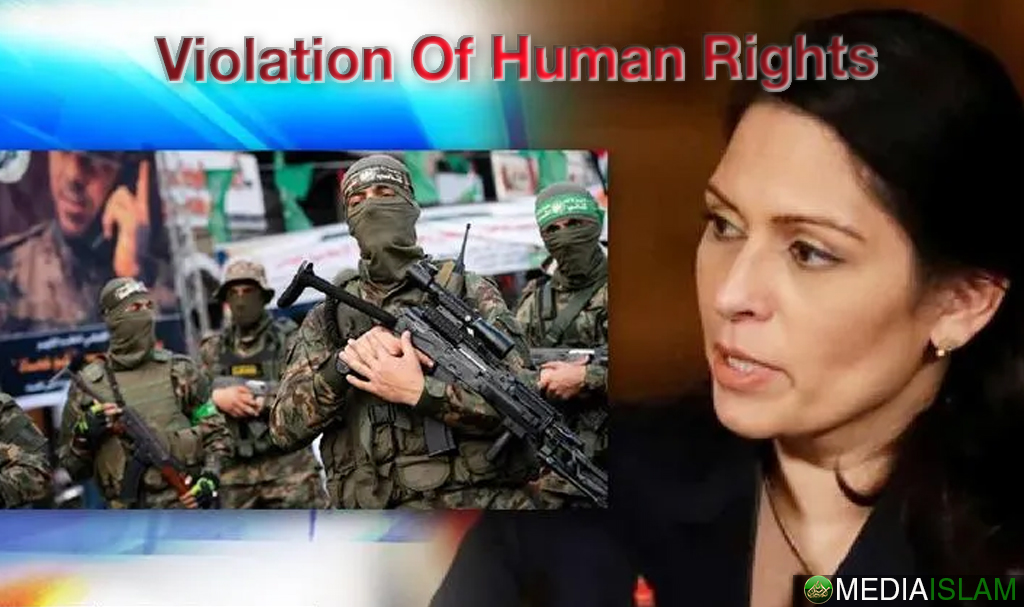 The United Kingdom’s move in listing Hamas (Palestinian Islamic Movement) as a terrorist organisation shows the extent of how deep the influence of the Zionists on the government of the UK is.

They intend to keep the spirit of the 1917 Balfour Declaration alive even though a long time has passed since its inception.

Thus, it is clear that the spirit of colonialism is still alive in the UK government, especially towards Islam and its adherents.

The Zionists commit the atrocities of robbing the Palestinian land and insisting on getting their country recognized and protected, with blatant disregard to the legality of their actions.

On top of that, they are becoming more aggressive day by day, to the extent of crossing the boundary of universal human rights and violating international law.

The offsprings of the native Palestinian population, who have inhabited the place several centuries before the coming of the Jews, were expelled by force.

Their houses and shops were demolished, gardens were seized, while some were burnt to crisp.

What the Zionists are doing is only to accommodate the Jewish newcomers who come from all over the world, in the spirit of their nation and religion.

Allah has decided that those worthy of the Palestinian land are the nation that upholds the religion of the prophets.

It is to honour the holiness of the land, where the migration of Prophet Ibrahim AS (the father of the prophets) took place, rather than to honour the Jewish nation or the Arab nation.

Moreover, it is also the gathering place of the prophets and one of the stops in the holy journey of Isra’ and Mi‘raj of Prophet Muhammad PBUH, who later became the imam to all the prophets.

The act of seizing the holy city by the most fanatic Zionist group due to Jewish nationalism and Judaism is illegal.

It has caused many casualties and wrongful imprisonment, either openly or privately, regardless of age and gender.

If they even had the audacity to kill the holy prophets, then killing ordinary people should be easier for them.

Other tales of the Jews’ atrocities are recorded in the Quran and other holy books.

Such is the attitude of a nation that is ungrateful despite receiving the blessings of Allah SWT, and as a result, become the most hated group of people in the sight of Allah.

“And they were covered with humiliation and misery, and they drew on themselves the wrath of Allah. That was because they used to disbelieve the ayat (proofs, evidence, verses, lessons, signs, revelations etc.) of Allah and killed the Prophets wrongfully. That was because they disobeyed and used to transgress the bounds (in their disobedience to Allah).”
(Surah al-Baqarah: 61)

Hamas is listed as one of the extremist groups because they have been relentlessly fighting against the injustice perpetrated by the Zionist towards Palestine and the Palestinian people.

They know that defending Palestine is a religious and humanitarian duty.

On the other hand, the Zionists and their violent and extremist state are defended through and through.

The decision taken by the UK government has severely tarnished the value of humanity and the morals of all religions.

The decision also tarnishes the reputation of the UK, which supposedly claims to uphold human rights and protect the sanctity of international law.

Truth be told, this should be humiliating for a country like the UK because that is the most basic criteria for first-world countries.

In fact, the UK is also one of the few countries with veto power in the United Nations Security Council, and it has agreed to abide by the Universal Declaration of Human Rights and the Fundamental Principle of Natural Justice.

At the same time, the decision also drew protests in its own country by real humanitarian activists consisting of politicians, scholars, and non-governmental organizations (NGOs).

However, all of them are completely ignored by the government, which claims to be democratically elected.

However, they are defeated by the temptation of money and media funded by the Zionist movement.

As a result, powerful villains emerge from the Western countries, and they continue to pull the wool over everyone’s eyes under the guise of justice and human rights.

What the UK government is doing shows that the souls of their leaders are deprived of morals and humanitarian values.

Thus, every decision these leaders undertake is motivated by the colonialism spirit that is still burning within them with the need to enslave fellow human beings.

Even the largest and the most aggressive beast can turn into a victim and experience its downfall at any moment, especially when it becomes increasingly violent and extreme.

Countries that rely on the influence of Zionists are actually relying on fragile branches.

So, even if the country is strong, it will still suffer either of these fates; slip or fall with the broken branches.

Those aggressive approach fails to extinguish the torch of the Palestinian uprising that aims to uphold Islam.

Contrarily, it manages to haunt the Western countries that are plagued by the Islamophobia pandemic.

The struggles of the Islamic movements that are carried out in the name of Islam, such as the struggle led by Hamas, fall victim to their ban.

Nevertheless, the light of Islam will never be extinguished and has now penetrated the European and American continents.

The light of Islam fails to be extinguished by Israel even though they are the most savage nation.

This is in accordance with the saying of Prophet Muhammad PBUH:

“A group of my nation will continue to be victorious upon the religion, overpowering their enemies. None who oppose them will harm them, except what afflicts them of difficult circumstances, until Allah brings his command while they are like so.

The companions asked: ‘O Messenger of Allah, where will they be?’

Prophet PBUH said: ‘They will be in and around Bayt al-Maqdis.’”

The above hadith is an elaboration to these Quranic verses:

“And We decreed for the Children of Israel in the Scripture: ‘Indeed you would do mischief in the land twice and you will become tyrants and extremely arrogant!’ (4);

“So, when the promise came for the first of the two, We sent against you slaves of Ours given to terrible warfare. They entered the very innermost parts of your homes. And it was a promise (completely) fulfilled. (5);

“Then We gave you a return of victory over them. And We helped you with wealth and children and made you more numerous in manpower. (6);

“(And We said): ‘If you do good, you do good for yourselves, and if you do evil (you do it) against yourselves.’ Then, when the second promise came to pass, (We permitted your enemies) to disgrace your faces and to enter the mosque (of Jerusalem) as they had entered it before, and to destroy with utter destruction all that fell in their hands. (7).”
(Surah al-Isra’: 4-7)

The Arab and Islamic countries that are influenced by the normalisation agenda with the illegal state will receive the same fate any time soon.

This is because they follow another qibla for international politics that are constantly changing and drift away, even though the qibla of their worships do not change.

Only those who are steadfast with Islam will be safe in this world and the hereafter.

Without Islam, there will definitely be misfortune in this world and the next.

The decision of the UK government to attach the label of terrorist to the struggle of the Palestinian to uphold their religion and safeguard their sovereignty is an infringement of justice and human rights.

It is a circumstance that touches on the fundamental principles and concept of universal human values.

Truly independent and sovereign Islamic and Arab countries will stick with the legitimate struggle of the Palestinian.

They will not become pawns to the Zionists and their allies who incurred the wrath of Allah.